In the late 1990s, Mercedes and other automobile manufacturers were perplexed by the number of embedded engine sensor failures that were occurring after routine dealer servicing. Investigation revealed that the connections from the embedded sensor and the engine controller were easily reversed, causing the sensor to fail. Bosch needed a quick fix that could be implemented mid-model year. Bosch’s sensor manufacturer was at risk of losing the business and called upon JVD to engineer a custom reverse polarity protection chip that would reside between the sensor and engine control module.

The proximity of the chip embedded sensor meant that the new chip had to have a high operating temperature of 150°C with out latching up. In addition, it had to be able to withstand the lesser known automotive jump battery spec of 26V (protection in the event a charger-battery is placed in series with the existing battery rather than in parallel.) Finally, the chip had to work first pass so that the sensor manufacturer could retain its #1 supplier position.

None of the big digital foundries could meet these requirements. JVD approached a Silicon Valley fab who had a process that was close to what was needed. The fab was willing to make the necessary changes to produce the product in an N-channel analog process.

Although the program was short lived, lasting less than two years and solving the problem until a next generation engine controller became available, JVD shipped over 11,000,000 units.

Our Customer wanted to lower their costs for one of their power supplies. They thought their 75K per year volume was too low to justify an ASIC 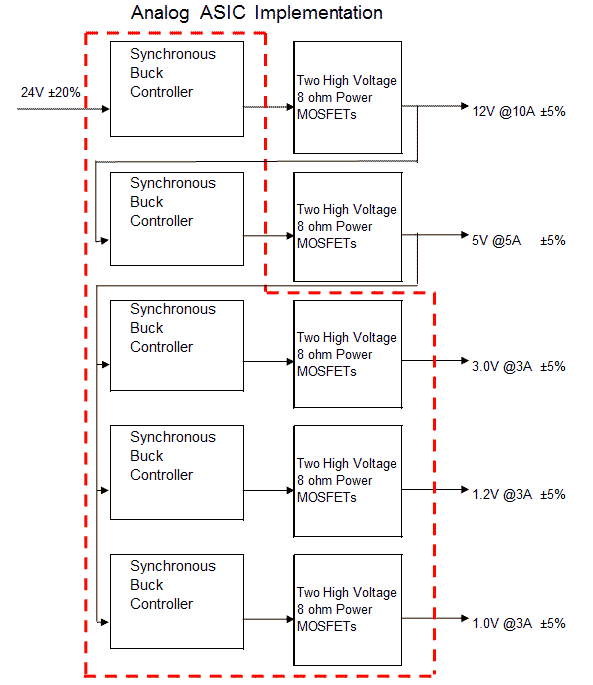 Although further integration is possible, the area outlined in red (above) is the most cost effective approach to reduce costs with an Analog ASIC. The customer was paying $7.50 total for the five controllers and six MOSFETS.

For this example, the total up front costs for the ASIC design and all production tooling is $327K. Initial pricing for the new Analog ASIC at 75K per year is $3.35, declining to $2.90 in 4 years. The following Economic Value Analysis shows the potential cost savings to the customer, including calculations based on forecasted price reductions for the standard products in use today.

ASIC integration saved this customer between $670K and $1.1M over 4 years.

Moreover, in this example, the sales volume would have to decline by more than 70% before the Analog ASIC would yield a negative return on investment.

Our customer was having difficulty penetrating a new market because the size and cost of the signal conditioning circuitry were prohibitively high. The sensor element is a thermal anemometer structure requiring a very accurately controlled heater current that could be sourced from as much as 36V. The circuitry incorporated a Step-Up DC/DC Converter, several op amps and MOSFETs, a Micropower Instrumentation Amplifier with Zero Crossover Distortion, and a small state-machine. The BOM replaced by the JVD Analog ASIC was $5.05 at 100K quantities. In this example, the customer was equally concerned about reducing the size of the sensor plus conditioner than with cost reductions.

The total up front costs for the ASIC design and all production tooling is $248K. Pricing for the new Analog ASIC at 100K per year is $0.99. The following Economic Value Analysis shows the cost savings the customer obtained is well in excess of $1Million.

Our Customer was developing a new product that required a very small form factor and would communicate effectively between the various automotive buses available at the OBD-II port and an ARM Core microprocessor. The chip includes five communication transceivers protocols and must successfully configure them to any combination of the 16 pin on the OBD-II connector, depending on the make and model of the automobile:

Their original design was far too costly and more importantly, impossible to manufacture in the desired form factor.

The total Bill-of-Materials (including integrated passives) for the discrete solution totaled well over $20 in high volume. The final Analog ASIC resulted in the following System on a Chip (SoC, below) solution that sells for under $5 in high volume.

Decision making criteria for the Automotive customer was based on size reduction. The component cost reduction was phenomenal due to the exceedingly high volumes and the large difference between the current component costs and the ACICs cost.